Olive becomes the High General of the kingdom.

A carriage stops by the protagonist's residence, and Olive is told to go to the palace. This is because the King and the about-to-retire General want her to become the next General in the King's army. Olive isn't very convinced at first, but the old General tells her that she can study and prepare under his care. This convinces her to take up the post.

"That is wonderful, you must be proud." 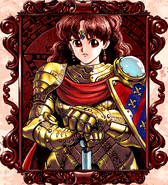 Retrieved from "https://princessmaker.fandom.com/wiki/High_General_Ending_(PM2)?oldid=10909"
Community content is available under CC-BY-SA unless otherwise noted.